Centering a Distribution: A Visual Guide

I recently needed to center a few distributions. While a very simple operation, I tend to double-check my intuitions without blindly implementing something. However, a Google search did not turn up anything useful, so I fiddled around myself, confirmed my intuition, and tell you all about how to center a distribution in this short article.

When you have two distributions which you suspect to have some correlation, but which feature completely disjoint values, what do you do? That was my problem last week. Specifically, I had a series of Kullback-Leibler-divergences and a series containing the percentage change of the U.S. GDP (Gross Domestic Product) over time, and I wanted to check if they correlate.

The problem is that KL-divergence is defined over the range $[0; \infty]$ and percentage changes theoretically over $[-\infty; +\infty]$ (though in reality GDP changes mostly fall somewhere between $[-10\%;+10\%]$). In other words, you can’t really compare the two distributions without any preparations.

But a colleague had a great idea: Why not center the distributions and compare them this way? Even though I roughly knew what this entailed, I wanted to double-check my intuition and thus turned to Google. A quick search for “centering a distribution” returned zero useful results. Rather, there were tons of results for tutorials that show how to “find the center of a distribution”. Disregarding the obvious fact that the “center” of a distribution is simply the mean or average, I came up short.

However, with a little bit of fiddling, I finally implemented a function myself that can center a series of values, thus rendering my two distributions comparable. The function (when implemented in numpy) involves just six short lines of code:

When you center a distribution, what you effectively achieve is to squeeze it so that most values fall into the range $[-1;+1]$ (specifically: 95% of all values). Since this works with any distribution of any shape, this can render them comparable.

In my case, I wanted to compare two time series of change. Kullback-Leibler-divergence measures the change from one distribution to another one, i.e. I had one distribution per year, and the KL-divergence values measure how much they changed from year to year. The other distribution, GDP, should be fairly self-explanatory. I wanted to check if these two series correlate since I strongly suspected such a correlation in my case.

If you’ve cleared this path, it should be safe to compare the distributions. The next step is to actually center them. A centered distribution must have a mean of 0 ($\bar{x} = 0$) and a standard deviation of 1 ($\delta = 1$). By doing this, you render the individual values comparable between the distributions.

Stretching the distribution is theoretically a little more involved. Since you want to just move all values a little bit closer to zero, the required operation here is division. You have to basically find a divisor that, when you divide every value by it, ensures that the resulting standard deviation is 1. This was actually the main reason for which I went online, because I wanted to double-check that my intuition was correct and which is where Google failed me. But my intuition proved right: The divisor we’re looking for is the standard deviation of the distribution.

Basically, as you can see, you first calculate the mean, then the sum of squares (“Sum of squared deviations of the values from the distribution mean”) and the average of the sum of squares is defined as the variance. Another word for variance would also be the “spread” of the distribution. The square root of the variance is then defined as the standard deviation, or the amount by which 95% of the values spread around the mean. (A range of two times the standard deviation would include 99% of all values, and three times includes 99.9% of all values – that's also where the "significant on the 0.1%-level" speech comes from!)

For our example, dividing all values by the standard deviation will stretch or squeeze them into our target range while preserving the differences between the values themselves. A value of, e.g., $0.53$ in both centered distributions will then indicate that they’re proportionally the same (regardless of what the original, absolute value of them was in the original distributions).

After having cleared the why, let’s move on to the how. Here, what I want to do is simply explain the function I wrote, since it contains not just the centering, but also a few safeguards that will help in the real world.

This line will create a list of Boolean values ([True, True, False, True]), indicating where there are NaN values in the series (NaN = Not a Number), which is a sign for missing data. You’ll encounter missing data in almost every dataset out there.

Here we’re performing the first transformation: Moving the distribution up or down so that the x-axis goes through the middle of it.

This line performs the second transformation and squeezes or stretches the distribution so that the standard deviation of the centered distribution becomes 1.

This last line then ensures that we’re not magically inventing data where there is none: It replaces the original missing values again with missing values. Fun fact: due to math magic™, all those values that we replaced earlier will be zero after centering. Try to think about why that is!

Let’s begin the centering operation by first substracting the mean from every value. If we then plot both the original and the shifted values, we see the following graph (note that the shifted distribution has no gap, and a zero in place of the missing value): 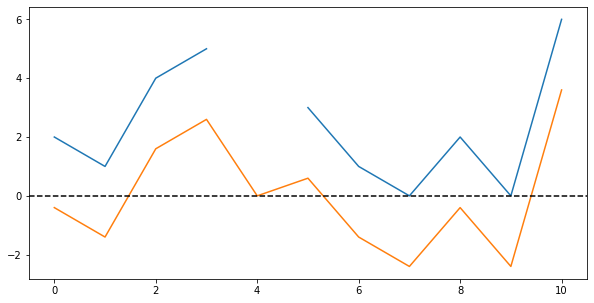 Finally, let us perform the second step in the centering operation by dividing all values by the standard deviation. Plotting all three series, we can see how the values’ range is now mostly $[-1;+1]$ except a few very large values: 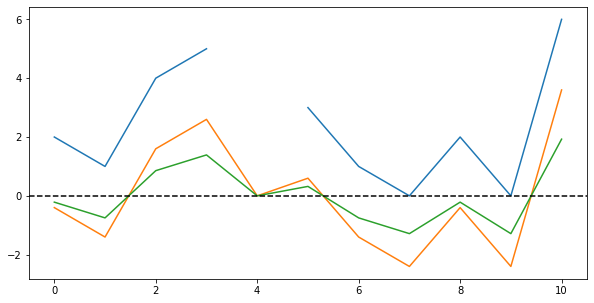 Lastly, by again replacing the former Not-a-Number-values, we can “restore” the gap in the data. Plotting both the original data and the centered values, we get this: 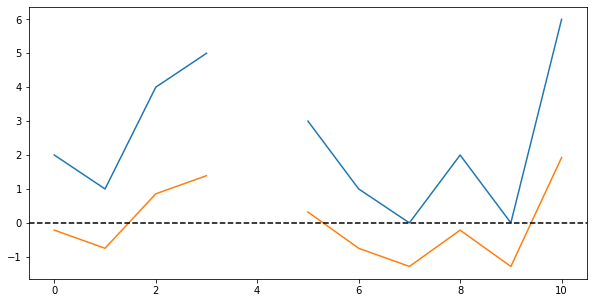 And that’s all you need to know about centering distributions!